OUR NEW BUSINESS GUIDE IS NOW AVAILABLE FOR DOWNLOAD

Read more
Back to news
AYOP

Preparatory work for the construction of the Hollandse Kust Zuid wind farm is in full swing. Earlier this year, a test foundation was installed on the Maasvlakte at the terminal of Sif Netherlands, the supplier for the monopile foundations. Bart Buisman managed this test phase for Vattenfall and explains what Vattenfall tested and why this is so important.

Things can get pretty rough on the North Sea; strong gusts of wind, treacherous currents and high waves. The foundations of the 140 wind turbines of the Hollandse Kust Zuid wind farm must of course be able to withstand all weather conditions. In addition, factors such as water depth and the seabed soil conditions also play a role in the design of wind turbines. During the test phase, we simulate the installation of the various wind farm components at sea.

Foundation without transition piece
In the summer of 2021, Vattenfall will start installing the monopile foundations for Hollandse Kust Zuid at sea. “We will soon be manufacturing 140 monopile foundations and we will be doing it to a new design. Naturally, as Vattenfall, we have a lot of experience with the construction of offshore wind farms, but never before have we built a wind turbine without a transition piece” Bart explains.

Such a transition piece is an intermediate piece of the foundation structure with work platforms and a ladder. Normally, that part is placed on top of the monopile (pile that is largely under water, ed.) Now Vattenfall attaches the work platforms and ladder directly to the monopile. Without a transition piece, Vattenfall hopes to be able to construct the wind farm faster and at reduced costs. “We will soon be performing the same installation work 140 times, so we see this test phase as a final rehearsal” says Bart.

22 meters high and 7 meters wide
In May 2020, Vattenfall started the test of the foundations – also known as a mock-up trial. The scale model, a large hollow steel tube, is 22 meters high, has a diameter of 7 meters and weighs 220 tons. By comparison: the actual length of the foundation is between 68 and 85 meters (the length varies by location). Vattenfall and its suppliers for the Hollandse Kust Zuid wind farm came to the Sif site on the Maasvlakte and each tested their offshore installation activities on the test foundation. In total, the test period lasted about two months.

Bart illustrates how this works: “Each supplier had about two weeks to perform ‘their’ test. At the start of the day, we got together with the whole team. We put the drawings on the table and discussed what exactly should be done. During the execution of the test, several points of discussion would come up. We noted these down and discussed them again at the end of the day. We then incorporated lessons learned into a report.” 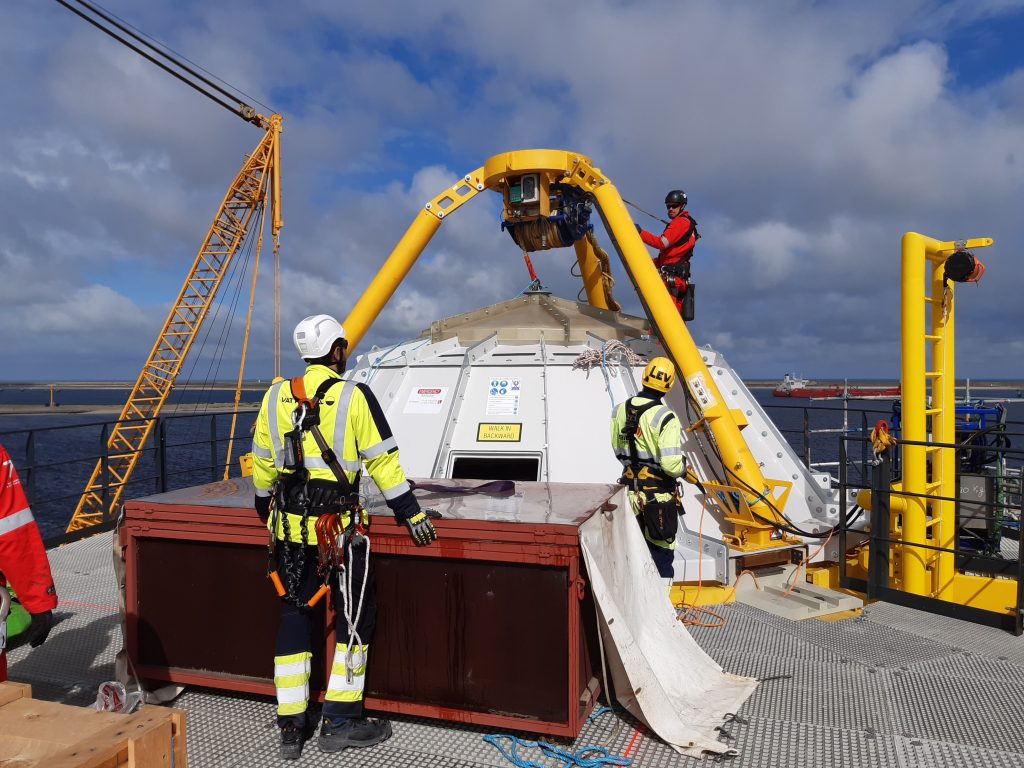 When building such a large-scale wind farm, good coordination during the offshore installation of wind farm components is essential. “There are a lot of ships working on the offshore construction site at the same time. If there is one delay, it has a knock on effect on the rest of the planning. Whilst the majority of installation works will be installed in the summer months for greater efficiency, we sometimes have days with poor weather in the Netherlands. The first priority of VF and all suppliers on the project is that all works are executed safely, which is precisely why such a mock-up trial is very important.”

Main lessons learned
It soon became clear that such a mock-up trial is held for a reason. There are two lessons learned that stand out for Bart: “Once the wind farm is operational, we will have to carry out maintenance work. To do this, the wind turbines must be easily and safely accessible. That is why we attach a ladder to the turbines, which consists of two parts. During the test it appeared that the installation method for lowering one of the ladders is not yet optimal. That is now being adjusted.”

“The second insight is about how we pull the electricity cables through the steel pipes. That is labor-intensive and heavy work. Small adjustments allow us to make a good improvement in terms of safety and ergonomics.”