TenneT’s second undersea cable has been placed at depth in the seabed. The electricity cables are part of the connection that will link the wind farms Hollandse Kust (noord) & (west Alpha) at sea to the Dutch national grid in the coming years.

After the successful placement beneath the dunes, the cable was buried from the beach to the ‘plug socket at sea’ by contractor Jan de Nul (JLC). The first kilometres were placed in the seabed at a depth of some six to eight metres with the aid of the cable trencher Moonfish. The task was taken over by submarine vehicle UTV1200 from several kilometres off the coast to the ‘plug socket at sea’. This transformer platform from TenneT is located 18 kilometres off the coast of Egmond. For the latter part of the trajectory, the cable was placed at a reduced depth of some two to three metres.

As the four cables are not connected from the beach to the sockets in a straight line, the number of cable kilometres involved is significantly higher than the distance from the coast. To illustrate, the first undersea cable for Hollandse Kust (noord) consisted of some 34 kilometres of cables placed in the seabed. The socket for Hollandse Kust (west Alpha) will be even further out at over 50 kilometres, which constitutes a length of nearly 70 kilometres in cable. As every socket is equipped with two cables, the total cable length is some 210 kilometres.

After its second stint, Moonfish was placed back onboard the offshore supply vessel MPI Adventure and returned to the port of Amsterdam where various alterations were made to enable the robot vessel to bury the next undersea cables. After a few tests, the black and yellow Moonfish started driving to the Heemskerk beach over the seabed on the night of Tuesday 19 July, arriving at the work site early on the morning of Wednesday 20 July. 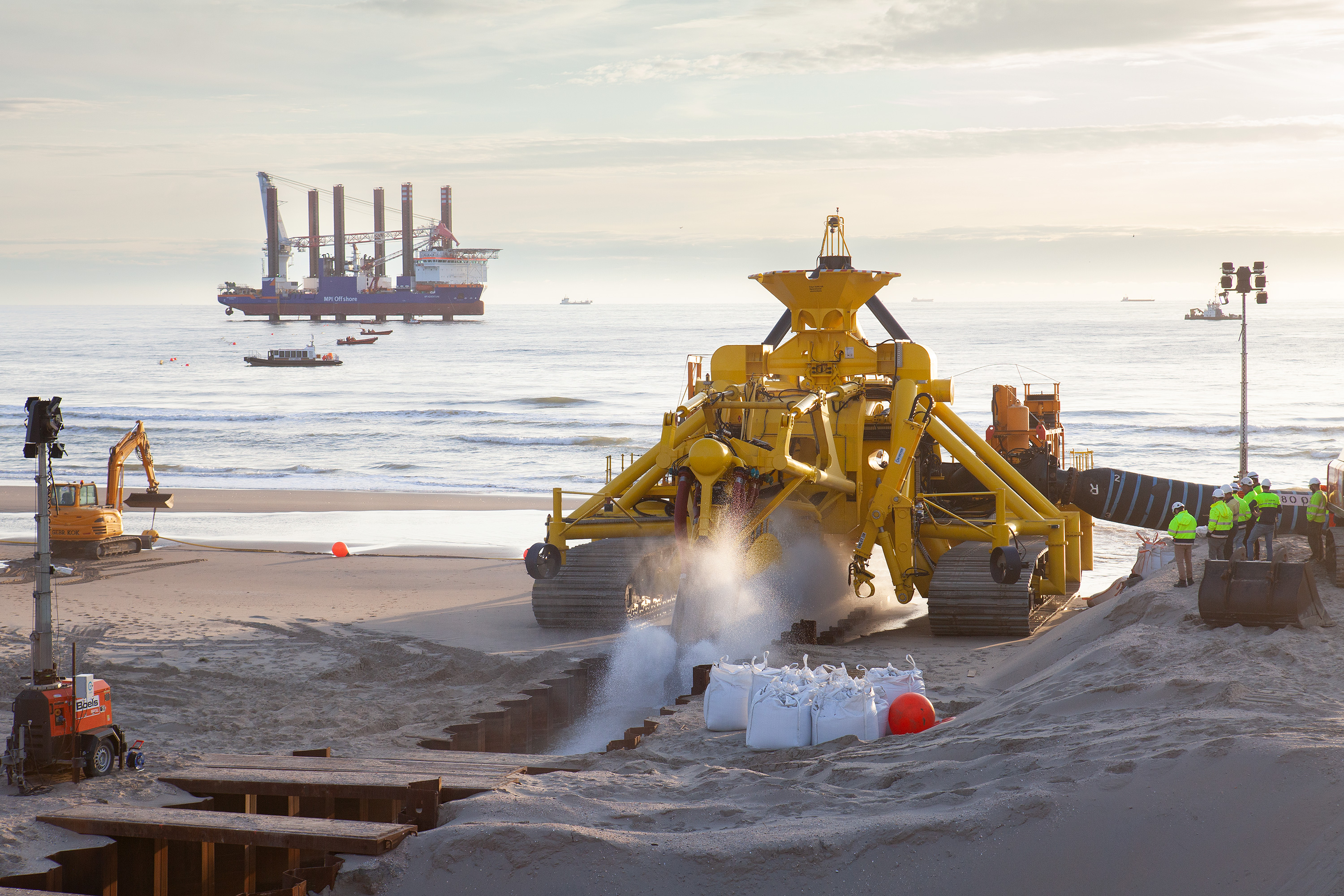 During the burial activities JLC’s remote controlled cable layer moves over the predetermined trajectory for the cable involved. A floating water pipeline pumps water to the powerful waterjets on the long metal sword of Moonfish, allowing it to create a six- to eight-metre-deep gulley in the seabed in which the cable is placed directly. The gulley is then covered again by sand thanks to the movement of the water.

The other undersea cables will be installed in the coming weeks. The third cable, for example, has already been pulled beneath the dunes and is ready to be buried. This leaves the fourth and last undersea cable. With the first two cables safely placed below the dunes and at a safe depth in the seabed, the related exit pits on the Heemskerk beach are being removed. These constructions were necessary to bury the cables at a depth of some six to eight metres in the beach. After the first pit had been filled with sand, JLC removed the sheet piling from the beach. The sheet piling from the second pit has also been partly removed.