BEVERWIJK (NL), 18 February – The first jacket pipes for the TenneT land cables are in place after eight underground controlled drilling sessions were carried out over the past six weeks. Cables to connect the Hollandse Kust wind farms (Noord and West Alpha) to the existing high-voltage substation by the A9 motorway will be led through these pipes later. Project manager Robert Wijnholds looks back at a successful start.

Contractor NRG performed four drilling sessions from the Westerhout estate (WKT6a) in Beverwijk towards the future transformer station on Zeestraat (WKT4/5). A second electric drill was used to drill from the site near Tata Steel (WKT3) to the Zeestraat location in four sessions. This means that eight of the nearly 40 drilling sessions have now been completed. Each drilling hole was used to place four empty jacket pipes.

Working hard
“Everything went very smoothly,” says Wijnholds. “The drilling team worked exceptionally hard and there were no delays. You can always some across unexpected issues with this kind of drilling, especially at the start, but the sandy soil made for easy drilling and sufficient counterpressure.”

Switching fast
An unforeseen factor was the period of extreme winter weather. “In addition, our electrical drill, which places the jacket pipes in the drilling holes, had a technical defect on the final day of activities,” adds Wijnholds. “Thankfully we were able to make a quick switch with a hydraulic drill system and the team made up for lost time on the evening of the same day.”

What’s next?
NRG will be carrying out activities at twelve different locations in Heemskerk, Beverwijk and Velsen until the end of 2022. The next location (WKT7) at Holland op zijn Smalst has now been prepared, and the team will be returning in mid-March to the Westerhout estate for four more drilling sessions towards the Holland op zijn Smalst site. Wijnholds: “The defective drill is being repaired as we speak and the second electrical drilling system deployed at the Tata site is currently being used in Vlissingen. It will be returned to Beverwijk as soon as possible.” 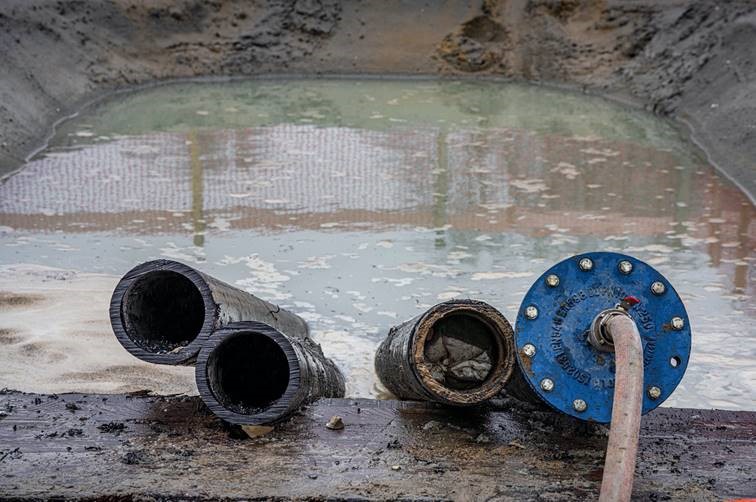 Each drilling hole contains four empty jacket pipes which will be used for the electricity cables at a later stage.

Overview of the sites where the NRG consortium is operating.

Windplanblauw and the logistic journey from the Amsterdam port

Amsterdam to have its own 'Zeehavendagen'