Dutch television news show EenVandaag aired a report on 4 August about the challenge faced by Port of IJmuiden and others in relation to handling the extra vessels needed for constructing more wind farms in the North Sea. It featured experts such as Peter van de Meerakker (Zeehaven IJmuiden NV), Robert Portier (Vattenfall), Willem van der Wel (Windcat Workboats) and more. The report can be viewed below and here is a summary in English of the main points.

Russia’s invasion of Ukraine prompted the Dutch government’s decision to install around twice as many wind turbines in the North Sea than previously planned. This requires extra staff and vessels, yet the Dutch ports, including IJmuiden, are already bursting at the seams.

Three wide yellow vessels are moored in the IJmuiden port. Owned by Windcat Boatworks, they resemble catamarans but without a mast. Their actual function only becomes clear when you step onboard and see the empty seats: these are passenger vessels.

Not ordinary passenger vessels, though – they transport engineers. “These three vessels are used by energy company Vattenfall, which is currently building the turbines in wind farm Hollandse Kust Zuid,” says Willem van der Wel, director of Windcat Boatworks. “Each vessel seats up to 24 people.”

And these numbers will only increase. “The engineers we now transport daily are working on construction but transport will later be needed for maintenance too.” And it will become even busier when you look at the Dutch ambitions for wind energy at sea. “We’re talking about a ten-fold increase at least.” 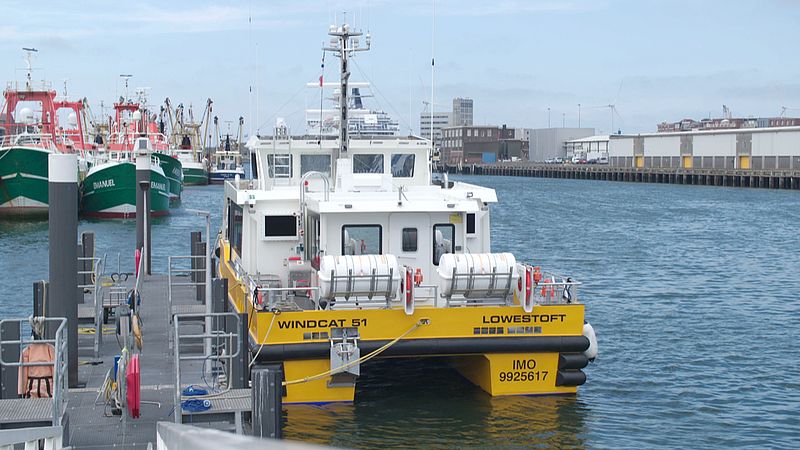 “All the ports are filling up”

In addition to all the existing oil & gas platforms, hundreds of turbines are due to be built on the North Sea over the coming years. “These types of projects take up space, which means that other activities have to be postponed,” Van der Wel continues.

Many of these activities fall under the responsibility of Port of Ijmuiden director Peter van de Meerakker. His port is welcoming an increasing number of vessels for the sustainable energy sector. “I don’t think people are sufficiently aware that this increase in activities at sea could lead to a huge expansion of the port and quay infrastructure. We will soon start to see shortages. Whether it’s the east coast of the UK or the Dutch coast, you can see that all the ports are filling up.”

Parts from Europe and China

“What I am most worried about is the installation work,” Van de Meerakker continues. “Nobody is considering it now but large installation vessels will be needed to install these giant wind turbines with a capacity of 12 megawatts and exceptionally wide blades.”

This work will require a complex logistic puzzle to be solved. “The parts – turbine, foundation piles, blades – are manufactured elsewhere in Europe or even in China, and brought to the port on dedicated vessels. The Netherlands does not have suitable port premises to store these parts before they are taken out onto the North Sea for installation.”

Van de Meerakker of Zeehaven IJmuiden does have a solution in mind, and he has been working on it with Velsen Municipality, Port of Amsterdam, the Province of North Holland and Tata Steel. “We have found an area on the north side of the North Sea Canal, the former Averijhaven, which is currently being used as a sludge depot,” he elaborates. “Rijkswaterstaat, part of the Dutch government, is currently cleaning it and we see opportunities for realising a15-hectare port area with 600 metres of new quays there.”

This Energy Port, as they want to call it, also has environmental benefits, according to Van de Meerakker. “It will reduce sailing times. Installation vessels could sail there directly and bring six complete wind turbine sets.” It could save both time and money. “You can install the sets in a much shorter time cycle than what is currently possible. And at lower costs.”